My various online social media sites used to be an escape from reality. I could jump online and see what others around the world were doing. Living vicariously through them gave me a little break and it stimulated my imagination. Anymore, my online escape is tainted by the world’s ugly realities. On Facebook, all I see are posts about controversial topics which beckon my emotional energy and financial support. There are people in need, effected by tragedy both locally and in other parts within the country. People eagerly post opinions from either side of the hot button topic du joir. Truth feels lost within the biased and inflammatory (my opinion) reporting from both sides.

What I’m writing about is nothing new. There has been propaganda since forever. Probably since ancient civilizations. Whomever shouts the loudest might be viewed as “right”, whether they are or not. Much of this shouting has been evident in the months leading up to our presidential election. The election is still in the news with Donald Trump’s most recent claim of voter fraud and bias. He recently took to twitter (such a modern man) claiming he’d won the election AND the popular vote, provided the “illegal votes” be tossed out. Give me strength.

Here’s a question: Can we toss out the electoral college once and for all? Had the electoral college been abolished, Donald Trump would not have gotten the presidency as he most definitely did NOT win the popular vote. However, he’d probably still be in the news ranting about fraudulent voting so…. I suppose we wouldn’t be completely rid of him either way. I quit watching the news after I had children, for my own sanity. However, one cannot completely escape what is happening in the world and that’s what spurred this blog post. I’ve truly had it with the inaccurate and biased reporting from our popular news outlets. SO much fear mongering abounds in the news. It seems to be the media’s only constant.

This morning, the stress surrounding our current state of affairs felt particularly heavy. So much so that I researched immigration to other lands. Granted everywhere has their issues and nowhere is perfect. The grass is often not greener once you’ve crossed the metaphorical fence. Many would look at my reaction to my feelings as juvenile and not “American” enough. How could I consider myself a good American if I am dreaming about jumping ship?! My morning’s research was simply an attempt to mentally flee my fear invoking reality. I feel there’s no harm in imagining a different life, far removed from feelings of impending doom and uncertainty. In my research, I also discovered I’m not eligible for Irish citizenship by decent as my ancestor is too far down the family line. (Looking at you Michael Cronin, my 5th great grandfather from Co. Cork.) So you’re safe from me for now, Ireland.

I’m not quite sure how to end this blog post other than to say the future feels really scary. I have this glimmer of hope that somehow the person we elected for president will never reach office, by some blessed twist of fate. I also have the hope we will be kinder to each other in the new year, despite the Alt-Right cancerous bullshit I’ve seen pop up in my Twitter feed. These seeming naive hopes are what’s keeping me moving forward. That and the fact that being a sloth in my pajamas for weeks on end doesn’t pay the bills. Also, coffee and alcohol are also playing their respective parts beautifully. I’m looking towards 2017 with a nervous tummy, but also trying to have optimism. Surely it has to be better than 2016, right?

I found a blog on WordPress which has left me quite smitten with the author’s mind. The blog is called Unshaved Mouse and the man behind the mouse is Neil Sharpson. Neil is an Irish playwright and the bulk of his blog is film reviews. Disney canon classic films were his initial focus but he has branched out into reviewing many of the animated films I love and have watched with my kids. The review of Snow White was simply brilliant. The Unshaved Mouse is full of wit, insight and humor. I think Neal Sharpson is a brilliant writer and I highly recommend checking out his blog.

After seeing such a great blog, I am compelled to step up my own blogging game. I feel inspired to improve my level of writing. I’ve been reading though my past posts and culling what no longer reflects my current mindset. When I first started writing, I had a lot of pain inside me which needed an outlet. Airing my very personal thoughts in public might not have been the wisest thing, but it has been damn cathartic.

I still want to write from the heart as I always have but I want that heart to be a happier place. I have written a lot about grief and loss this year. I’ve written about my fears, anxiety and challenges with depression for several years. I know everyone has experienced loss in some way. Everyone has fears. Many people can relate as they’ve know the reality of anxiety and depression. I’ve been in a black, sticky, dark and unpleasant place with my writing for some time. I do not like that. I want to do better. I need to do better and I shall strive to do so. 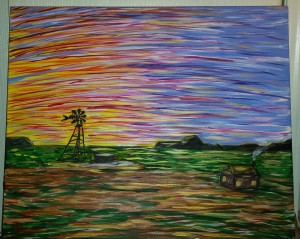 We recently took a trip to Austin, TX. Our goal was to take my mother in law to stay with her sister & family. Austin is about 18 hours away from where we live. Long drives with lots of time to think nice, sometimes.

Our journey took me back to the memories of family vacations as a kid. Each Summer, we’d take a road trip to Arizona. Going to a place where the temperature was similar to that of Hades was not appealing. I was a kid and my opinion did not count, so off we went. My mom was the one who wanted to visit Arizona every year. We visited many national parks, saw lots of Indian ruins and lots of barren land. We saw the Grand Canyon and Monument Valley (to name a few places). We camped along the way to save money. This is what my mom did when she was a kid. Her dad fixed up an old VW bus and converted it to sleep all 7 of the family. My mom had great memories of those family vacations and wanted to recreate those times with her own (reluctant) family.

The magic of those simple times were lost on me as a kid. I remember a few of the places we stopped to see over the years but what I remember most is being hot and uncomfortable. As we drove across Texas, something I haven’t done since those days long ago, memories started coming back. I’d forgotten just how many signs there were for fireworks. Seriously, it’s a bit much New Mexico and Texas! I remembered hearing the names of the places we passed this go around. I vaguely remembered which vehicle we drove (when I was a kid) when we went to that area. I saw loads of windmills. My mom loved windmills and would always point them out whenever she saw one. I could almost hear her say “Oh! Look at the windmill!” whenever we’d pass one. All those trips were taken when I was pretty young; long before there was any expectation for me to be anything else but a kid. I felt like there were ghosts of vacations past hanging out along the road.

It still feels so weird to know that she’s gone. On our way back from Texas, we stayed at my dad’s place-formerly know as “my parent’s house” before mom passed. My dad had gone on a trip and we had the place to ourselves. Again, it felt weird walking into the house because it didn’t feel vacant. I still expected her to come out of the back room to say “hi” even though I know she’s not here anymore.

I was very happy to get back to my own house and family however, this trip left me feeling quite sad. Sometimes the memories and ghosts are kind. Sometimes they remind you of simpler times. They also can remind you that life is not as simple and carefree anymore. Memories make you feel old and sad because your reality is not as happy as you’d like it to be. Sometimes, the memories bring into clear focus the good and filter out the bad. They amplify the laughter that once was and make you long for those brief moments again. Old memories can also help you find those tears which desperately needed to flow. Cheers for that.